Is Clinical Differentiation Possible in the Biosimilars Market? 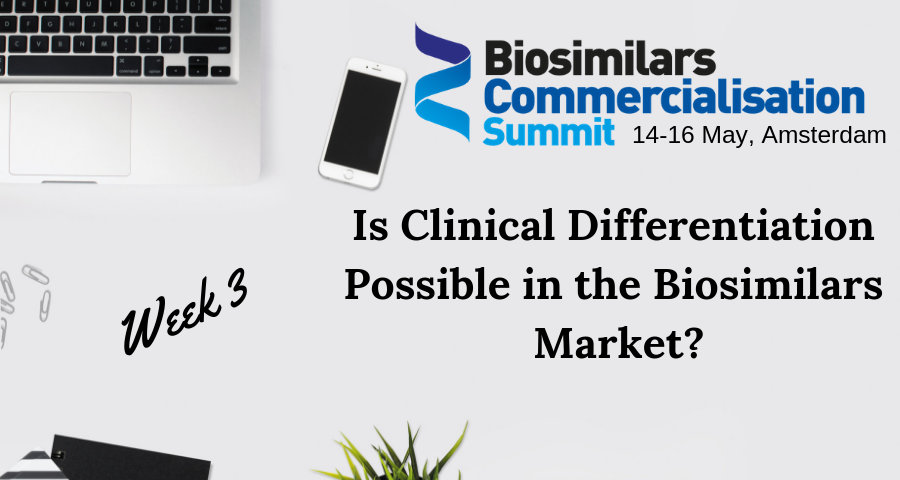 As the mantra goes, for companies operating in highly competitive markets, including the pharmaceutical industry, you need to ‘differentiate or die.’

Differentiation in the pharmaceutical industry can take several forms, but ultimately these tactics can be boiled down to ones that either focus on enhancing the brand at its most basic level (i.e. its clinical profile), or improving the commercial proposition of the brand or brand family.

Commercial tactics tend to be quicker, cheaper and more responsive to market change compared to developmental tactics. But the overall aim of both approaches is the same; to drive differentiation in the eyes of end-users, such as patients, physicians and payers, so that your brand is used preferentially ahead of other options.

In the biosimilars market, being different to other biosimilars of the same molecule, and the reference brand, is tough. Biosimilars are, by definition, developed to be highly similar and clinically equivalent to an existing biological medicine.

For some classes of product that is definitely the case. In heavily commoditised classes, such as the short-acting filgrastims, there is potentially little to be gained from investing in additional clinical data for your filgrastim biosimilar brand. With over 90 percent of the European short-acting filgrastim market now captured by biosimilars (personal communication), commercial tactics tend to be the focus due to their lower cost and comparative speed of implementation.

In other classes it would seem that some companies are moving away from the herd, and investing in developmental tactics that are seeking to enhance their biosimilar brand’s clinical profile.

For example, Icelandic biosimilars developer, Alvotech, has invested in the development of a high concentration (100 mg/ml) formulation of AVT02, a proposed biosimilar of AbbVie’s Humira (adalimumab).

In late February 2019, the company initiated its Phase III ALVOPAD PS clinical trial, which aims to assess the safety and efficacy of AVT02 to EU-sourced Humira (adalimumab 100 mg/ml). The study aims to recruit 400 patients with moderate to severe plaque psoriasis across 40 clinical centres in central and eastern European countries. Another Phase I study has been completed, and another Phase I study is currently ongoing.

So what’s the rationale behind Alvotech’s decision? The first point to make is that it’s important to remember that the four Humira biosimilars that have been approved and launched in Europe so far reference the 40 mg/0.8ml (or 50 mg/ml) formulation of Humira. As such, and due to AVT02’s formulation containing a higher concentration of adalimumab, Alvotech believes it will be more convenient for patients, based on the reduced injection volume.

In a similar approach, Korean biotech Celltrion are developing a subcutaneous (SC) formulation of its infliximab biosimilar, CT-P13 (also known as Remsima and Inflectra).

Despite clinical trials for SC CT-P13 being completed back in September 2018, and a filing to the European Medicines Agency’s CHMP being made in December 2019, it’s only recently that we’ve seen the clinical data for SC CT-P13. New data presented at ECCO (European Crohn’s and Colitis Organisation) 2019 show that the SC formulation of CT-P13 is comparable in terms of efficacy and safety with the intravenous (IV) formulation of CT-P13 for the treatment of patients with Crohn’s Disease (CD) up to week 54.

Professor Walter Reinisch, Director of clinical IBD study group, Department of Gastroenterology and Hepatology, Medizinische Universität Wien, said, “CT-P13 SC could become a game-changer in biosimilar treatment by improving convenience and allowing patients to be more in control of their treatment.”

It remains to be seen whether other biosimilar developers invest in their own developmental tactics in an attempt to differentiate their biosimilar brands and portfolios. If they all want to compete in the biosimilars market for the foreseeable future, one thing is for certain; they will need to differentiate or die.

*Processing your payment may take a moment. Please click submit payment only once, and do not refresh this page. Doing so may result in your credit card being charged more than once.

We use cookies and similar technologies to recognize your visits and preferences, as well as to measure the effectiveness of campaigns and analyze traffic.
To learn more about cookies, including how to disable them, view our Cookie Policy