Key recent events from the European and US biosimilars market 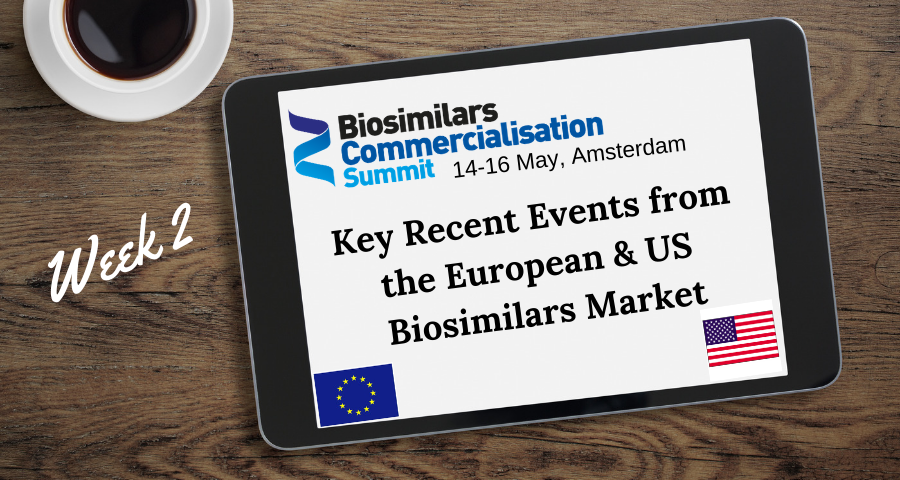 Insulin generics hit the US, but what about biosimilars?

Drug prices around the world, in particular in the US, continue to capture the headlines. And significant price differences between developed markets, like the US and UK, are inflaming an already delicate situation.[1]

In specific classes of drugs like insulin, prices in the US doubled between 2012 and 2016, according to an analysis shared with Reuters, even in older segments of the market.[2] And this is a class of medication that is absolutely essential to patient health. Going without is not an option.

This hasn’t gone unnoticed by certain members of the US Senate. In February 2019, the heads of the influential Senate Finance Committee launched an investigation into the high price of insulin, demanding answers from Lilly, Sanofi and Novo Nordisk – the three manufacturers that control most of the global market for insulin.[3]

The Senate Finance Committee’s ‘shot across the bow’ of Lilly, Sanofi and Novo Nordisk seems to have stirred one company into action. This week Lilly announced that it would be selling an authorised generic version of Humalog (insulin lispro), in what the New York Times has said is “an effort to head off criticism about the rising costs of prescription drugs.”[4] The generic version, to be called Insulin Lispro, will be sold at a 50 percent discount to the list price of Humalog.

Due to the regulatory differences between the US and Europe, insulin biosimilars won’t be available in the US until March 2020. This is when the US FDA begins transitioning approved marketing applications for insulin, and a number of other medicines, which were previously approved as drugs under section 505 of the FD&C Act, to be biologics.

Concerns, however, have been raised by a number of US senators that the current framework for this transition will “briefly halt companies from seeking to bring insulin competition to market.”[9] Senators Dick Durbin (D-IL), Kevin Cramer (R-ND), Tina Smith (D-MN) and Bill Cassidy (R-LA) wrote in a letter to FDA Commissioner Scott Gottlieb that although current FDA guidance will facilitate the submission of biosimilar insulin products for the first time, “the current regulatory framework still introduces perverse incentives that could delay the introduction of low-cost insulin products into the market in the short-term, when they are needed most.”[10]

Competition in the US insulin market is desperately needed in order to avoid potentially deadly “insulin rationing.”[11] The move by Lilly is perhaps a sign of things to come, with Sanofi and Novo Nordisk potentially considering similar moves.

Pegfilgrastim biosimilars launch in the UK and Canada, but can Amgen protect Neulasta revenues?

Within a few days of each other, Napp Pharmaceuticals and Apobiologix announced the launch of their respective long-acting pegfilgrastim biosimilars, Pelmeg[12] and Lapelga,[13] in the UK and Canada. This follows Pelmeg’s approval by the European Commission (EC) in November 2018,[14] and Lapelga’s approval by Health Canada in June 2018.[15]

Since their approval and launch in Europe, filgrastim biosimilars have captured 100 percent of the accessible market in certain European countries, such as Slovakia, Romania and Hungary.[17] Indeed, the European average market share for filgrastim biosimilars, at the end of 2017, was just over 90 percent. Uptake rates in Canada have been far slower.[18]

One would expect similar uptake rates for pegfilgrastim biosimilars in Europe. In its press release, Napp Pharmaceuticals comments that “longer-acting alternatives can offer a less demanding treatment schedule for patients between chemotherapy cycles than the current standard of care, which requires daily injections.”

The only difference between the short-acting and long-acting filgrastim markets is what Amgen has done in order to defend Neulasta, the branded version of pegfilgrastim, from biosimilar competition. In the US Neulasta’s on-body delivery device, OnPro, has captured over 60 percent of the pegfilgrastim market. Following a recommendation for approval in Europe in February 2018, Amgen are hoping that the strategy employed in the US will also work in Europe.[19]

Hot on the heels of its US FDA approval for the company’s trastuzumab biosimilar, Ontruzant, in January 2019,[20] Samsung Bioepis has announced that the European Medicines Agency (EMA) has approved a 420mg pack size. This follows the the European launch of the 150mg pack size in March 2018.[21]

This enables Samsung Bioepis, via its commercial partner in Europe, MSD, to compete more aggressively against Roche. Moreover, MSD will also be able to offer the same pack sizes as Kanjinti, Amgen’s trastuzumab biosimilar which was approved in Europe in May 2018.[22]

Since the first European launch in March 2018, trastuzumab biosimilars have captured a decent share of the accessible market. Roche’s biosimilar defense strategy for Herceptin has focused on a range of tactics, including the development of a subcutaneous version of Herceptin. Roche has developed this in collaboration with Halozyme, and it was approved in Europe in September 2013.[23] Where available in Europe, it represented as much as half the market in volume terms toward the end of 2017.[24]

More recently the subcutaneous formulation of Herceptin, Herceptin Hylecta was approved in the US. Herceptin Hylecta contains the same monoclonal antibody (mAb) as IV trastuzumab in combination with recombinant human hyaluronidase PH20, an enzyme used to deliver trastuzumab subcutaneously using Halozyme’s Enhanze drug delivery technology. Whereas IV trastuzumab takes 30-90 minutes to administer, this ready-to-use formulation can be administered to 2-5 minutes.

With biosimilar companies unable to challenge the greater convenience of subcutaneous Herceptin, due to them only being able to offer IV administered biosimilars, the approval of Herceptin Hylecta in the US could enable Roche to protect Herceptin revenues in the US in the face of impending biosimilar competition, which is expected in 2019.

[1] How the U.S. Pays 3 Times More for Drugs (accessed March 2019). Retrieved from https://www.scientificamerican.com/article/how-the-u-s-pays-3-times-more-for-drugs/

[16] The Biosimilar Landscape in Canada (August 2018). Retrieved from https://www.bereskinparr.com/doc/pdf/the-biosimilar-landscape-in-canada

[17] The impact of biosimilar competition in Europe (September 2018). Retrieved from https://ec.europa.eu/docsroom/documents/31642/attachments/1/translations/en/renditions/native

[18] Potential savings from biosimilars in Canada (April 2017). Retrieved from https://www.cadth.ca/sites/default/files/symp-2017/presentations/april24-2017/Concurrent-Session-B4-Gary-Warwick.pdf

[24] US nod nears for first Herceptin biosimilar as the European fight begins (November 2017). Retrieved from http://www.evaluate.com/vantage/articles/news/policy-and-regulation/us-nod-nears-first-herceptin-biosimilar-european-fight

*Processing your payment may take a moment. Please click submit payment only once, and do not refresh this page. Doing so may result in your credit card being charged more than once.

We use cookies and similar technologies to recognize your visits and preferences, as well as to measure the effectiveness of campaigns and analyze traffic.
To learn more about cookies, including how to disable them, view our Cookie Policy